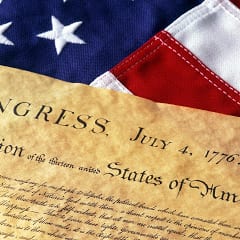 As we get closer to marking our 237th year of independence, we felt it was a good time to reflect on how debt is woven into our country’s fabric.

As our Founding Fathers developed the original Thirteen Colonies into the independent United States of America in 1776, debt already was a reality for the fledgling nation. Even from this early time, leaders financed wars by borrowing.

Shortly after the American Revolutionary War (1775-1783), public debt grew to more than $75 million and continued to swell considerably over the next four decades to nearly $120 million. However, President Andrew Jackson shrank that debt to zero in 1835.

It was the only time in U.S. history when the country was free of debt.

More than 200 years after the inception of our country and several wars, stock market crashes, powerful companies suffering from failed investments, rising unemployment rates, the famous bursting of a tech bubble and most recently the bursting of a housing bubble, federal debt stands at $16.7 trillion. The national debt between the Ronald Reagan era and Bill Clinton’s administration slowly increased, but it nearly doubled during the presidential term of George W. Bush to more than $10 trillion.

Here, then, is a brief timeline of how American debt has grown since John Hancock signed the Declaration of Independence on July 4, 1776.

Wars were always a major debt factor for our nation. Congress could not finance the Revolutionary war with large tax raises, as the memory of unjust taxation from the British stood fresh in the minds of the American public. Instead, the Continental Congress (made up of delegates from the Thirteen Colonies) borrowed money from other nations.

The founders led negotiations with Benjamin Franklin securing loans of over $2 million from the French Government and President John Adams securing a loan from Dutch bankers. We also borrowed from domestic creditors. While the war was still going on, in 1781, Congress established the U.S. Department of Finance.

Two years later, as the war ended in 1783, the Department of Finance reported U.S. debt to the American Public for the first time. Congress took initiative to raise taxes then, as the total debt reached $43 million.

The War of 1812 more than doubled the nation’s debt. It increased from $45.2 million to $119.2 million by September 1815. The Treasury Department issued bonds to pay a portion of the debt, but it was not until Andrew Jackson became president and determined to master the debt that this “national curse,” as he deemed it, was addressed.

By selling federally owned western lands and blocking spending on infrastructure projects, Jackson paid off the national debt after six years in office. This actually created a government surplus that Jackson divided among indebted states.

The time of prosperity was short-lived, as state banks began printing money and offering easy credit, and land value dropped.

Recovery from the Civil War

The Civil War (1861-1865) alone is estimated to have cost $5.2 billion when it ended and government debt skyrocketed from $65 million to $2.6 billion. Post-Civil War inflation along with economic disturbance from Europe’s financial struggles contributed to the vulnerable economic climate of the late 19th century.

The collapse of Jay Cooke & Co., a major bank invested in railroading, caused the Panic of 1873. Nearly a quarter of the country’s railroads went bankrupt, more than 18,000 businesses closed, unemployment hit 14 percent and the New York Stock Exchange began sinking.

This period of deflation and low growth continued for 65 months making it the longest depression, according to the National Bureau of Economic Research. During this time the government collected less money in taxes and the national debt grew.

People started investing heavily in the stock market in 1920 unaware that Black Tuesday would dawn with an $8 billion loss in market value when the stock market crashed on October 29, 1929. The United States relied on the gold standard and raised inflation, rather than lowering rates to ease the burden of inflation.

During the following era, income inequality between classes grew. More than 25 percent of the workforce was unemployed, people made purchases on credit and were forced into foreclosures and repossessions.

President Franklin D. Roosevelt developed programs for unemployment pay and social security pensions, along with providing assistance to labor unions. Although Roosevelt addressed many problems in the U.S. economy, the funding for his programs grew the national debt to $33 billion.

During World War II (1939 to 1945), the U.S. lent Britain and other countries money to help pay for military costs, and spent a great deal for their own military. By the end of that war, U.S. debt reached $285 billion.

Following that war, the U.S. economy grew, but the trend of a post-war reduction of national debt did not continue. Within a few decades, the Vietnam War and programs to help the poor, fund education and improve transportation increased debt further.

At the start of the 1980s, an increase in defense spending and substantial tax cuts continued to balloon the federal debt. The national debt at the end of the Ronald Reagan era was $2.7 trillion.

The era under President Bill Clinton was marked with tax increases, reductions in defense spending and an economic boom that reduced the growth of debt, but it still reached a staggering $5.6 trillion by 2000. Debt in the new millennium exploded with the September 11, 2001 terrorist attacks. Spending on homeland security and the Iraq War increased and the economy stalled. Also, a large portion of the federal debt stemmed from money borrowed by the government from Social Security and Medicare.

The U.S. experienced a recession from December 2007 to June 2009 characterized by high unemployment rates, the burst of the housing bubble and major government bail-outs.

Housing prices prior to 2008 were dwindling and subprime lending for mortgages was prevalent. But suddenly, adjustable rates on mortgages increased and doubled or tripled mortgage payments. Homeowners defaulted on their loans and hundreds of banks failed.

The government bailed out several major companies, including American International Group (AIG) Financial Products, which was the country’s biggest insurer, Fannie Mae and Freddie Mac (government sponsored mortgage entities). Within only a few years, housing prices dropped by around 20 percent and unemployment nearly doubled from 5.8 percent to 9.3 percent.

Unemployment remains a problem and the number of underemployed workers also remains high, requiring government spending for programs to assist those with great financial burdens.

Government expenditures are the highest for Social Security, Medicare, Medicaid and national defense. Unrest in the Middle East may cost at least $3.7 trillion by the time the conflicts end, according to estimates from a Brown University study.

The $1 trillion in student loan debt, which surpassed credit card debt for the first time, is not a good sign for America. That means students desperately trying to repay their loans might retreat from the housing and auto market, causing a greater drag on the economy.

While debt has been an issue since the inception of the U.S., its rapid growth will continue to challenge lawmakers into creating better programs to reign in expenditures, as well as American consumers who must develop improved way of managing their personal debt.