Americans have about 800 million credit cards in their wallets and purses. If laid end-to-end, those 3½-inch pieces of plastic would circle the globe almost two times.

Yet some people still can’t get one.

As many credit cards as there are, the national average for credit card approval is just 39.1%.

There are many valid reasons why most of the 61% were denied, but sometimes people are unfairly discriminated against.

Could you be one of them?

If so, the Equal Credit Opportunity Act is here to help.

What Is the Equal Credit Opportunity Act?

The ECOA requires banks, credit card companies and anyone else involved in lending to make credit equally available to all creditworthy customers.

It prohibits credit discrimination on the basis of race, color, religion, national origin, sex, marital status, age or because a person receives public assistance in whole or in part. It also makes it unlawful to discriminate against anyone who has exercised any rights under the Consumer Credit Protection Act.

When determining a consumer’s creditworthiness, financial institutions must instead consider income, expenses, debts and credit history. Creditors are permitted to ask for certain information to help in the documentation process, but even that is limited by certain rules.

The ECOA applies not just when credit is denied, but also if a consumer receives less favorable borrowing terms such as a higher interest rate. The ECOA protects borrowers in activities before, during and after the extension of credit.

When Was the ECOA Passed?

The Federal Reserve Board was originally in charge of enforcement. That role was transferred to the Consumer Financial Protection Bureau, which was created in 2011 as part of the Dodd-Frank Act.

That piece of legislation has been rolled back in 2018 after President Donald Trump promised to “do a number on Dodd-Frank.” Congress obliged and passed the Economic Growth, Regulatory Relief, and Consumer Protection Act on May 22, 2018.

It dealt largely with banking regulations, however, and proponent say should not adversely impact the agency’s watchdog role when it comes to ECOA guidelines.

Why Was the ECOA Passed?

Credit card companies were discriminating against women and minorities, and they weren’t even hiding those unseemly practices.

Women applicants were routinely required to have more collateral or extra cosigners. They were asked personal questions relating to their lifestyle choices and even sexual practices that had nothing to do with their creditworthiness.

People living in predominately minority neighborhoods were told they did not have sufficient collateral or that they lived outside the areas where the bank made loans.

Minorities had difficulty just getting loan applications, much less actual loans. Lenders didn’t consider public assistance or child support payments from alimony to be income, claiming those sources might not be permanent.

Lenders also took much longer to process applications from women and minorities in order to discourage those groups from seeking credit.

In short, if you weren’t a white male you were likely to be treated like a potential problem, not a potential customer.

What Is Regulation B?

The Consumer Financial Protection Bureau (CFPB) issued regulations under the ECOA that became known as “Regulation B.”

The purpose of Regulation B is to promote the availability of credit to all creditworthy applicants. It prohibits creditors from discriminating on any basis. It requires creditors to notify consumers of any action taken on their credit applications; report credit history in the names of both spouses on an account; retain records of credit applications; collect information about the applicant’s race and other personal characteristics in applications for certain dwelling-related loans; and provide applicants with copies of appraisal reports used in connection with credit transactions.

JP Morgan Chase was accused of failing to properly monitor loan reviews, which led to minorities being charged more for home loans than white borrowers with the same credit profile. As a result, the financial services company reached a $53 million settlement with the Department of Justice on Jan. 20 2017.

KleinBank of Minnesota settled a lawsuit with the DOJ in May of 2018 after an investigation showed the bank had excluded minority neighborhoods from its lending plan. Of 5,837 single-family loan applications, only 62 were from minorities.

Under the settlement, the bank agreed to open an office in a minority area, provide outreach programs to real estate professionals in minority neighborhoods and invest a minimum of $300,000 in credit program for consumers in minority areas.

Perhaps the most interesting individual case of discrimination happened to Lucas Rosa in 1998. A transgendered person, Rosa dressed a woman when he (or she, depending on how you look at things) applied for a loan at Park West Bank & Trust Co. in Massachusetts.

The loan officer asked to see identification and told Rosa to “go home and change” since he/she was dressed as a man in the ID photos.

Rosa filed a discrimination lawsuit, which was initially rejected but then upheld by a federal appeals court. Transgender people are among those protected by the ECOA.

Consumer Protections Under the ECOA

There are certain restrictions as to what information creditors are permitted to gather from you when you apply for credit.

Discouraging you from applying for credit based on race, color, religion, national origin, sex, marital status, age or because you receive public assistance.

Considering your race, sex or national origin when approving or rejecting a credit application, even though the creditor does have a right to ask for this information. You may choose to disclose this information voluntarily, as it helps federal agencies enforce anti-discrimination laws. Immigration status may be considered.

Imposing unfair terms or conditions on a loan (such as lower loan amount or higher interest rates) based on personal characteristics protected under the ECOA.

Asking detailed personal information regarding marital status, such as whether you are widowed or divorced. Creditors are only permitted to ask if you are married, unmarried or separated.

Inquiring about marital status if you are applying for credit independently. However, the following community property states allow it: Arizona, California, Idaho, Louisiana, Nevada, New Mexico, Texas, Washington and Wisconsin. Additionally, a potential lender in any state can request such information of an applicant seeking a joint account or one secured by property.

Asking personal information regarding plans for having or raising children. However, a creditor may ask about costs related to children and dependents.

Likewise, creditors also are barred from factoring certain considerations into their decisions.

Your age. Exceptions to this are if you are younger than 18 years old; older than 62 and the credit-scoring system favors people 62 and older; or if age is a valid issue for determining an applicant’s credit-worthiness.

The racial makeup of a neighborhood or community where you intend to refinance, improve or buy a home with borrowed money.

Consumer Rights Under the ECOA

The primary right consumers have under the ECOA is to receive a response on their application – favorable or unfavorable – within 30 days of receiving the application and if the application is denied, receive written notification of why it was denied.

If the response is favorable, the creditor can inform the applicant with a letter, or simply by issuing the credit card, loan money, property or services the borrower applied for.

Among the reasons that can be given:

If your application was approved but you don’t accept a loan based on unfavorable terms, you have the right to learn the specific reasons the lender offered those terms.

If you are a married woman and have taken on your spouse’s last name, you may have credit in your maiden name, your married name or a combination of both.

Signs You Have Been Discriminated Against

Some signs you have been a victim of discrimination are obvious, and some are not. Signs you may have been denied credit unfairly or given unfair terms and conditions are:

Evaluating income is a critical step in the credit application process and a place where discrimination could easily take place.

Another example would be to discount income because of sex or marital status. In other words, count only 75% of a woman’s salary while counting 100% of man’s salary.

One more way would be to refuse to consider alimony, child support or maintenance payments that are consistently made each month. You may have to prove the payments are made consistently.

How Is Equal Credit Enforced?

The Consumer Financial Protection Board, banking agencies and the D.O.J. share enforcement duties of the ECOA. The CFPB is the only U.S. agency whose primary mission is to protect consumers of financial services.

CFPB examiners monitor the practices of large banks and other financial industry players. They visit those institutions, review records and consumer complaints, analyze lending outcomes and interview employees and officers.

If a company self-reports violations, it is usually exempt from penalties other than paying refunds to customers affected by the violation.

If a lender is guilty of violating the ECOA, it can be sued in court for actual damages, punitive damages of up to $10,000 for individual lawsuits and $500,000 or 1% of the creditor’s net worth for class-action lawsuits.

Creditors are not liable for inadvertent errors such as mechanical, electronic or clerical mistakes that the creditor can show were not intentional.

If you are having a problem or issue with a financial service or product, you can submit a complaint online at https://www.consumerfinance.gov/complaint/getting-started or call toll-free to 855-411-2372.

If you apply for a credit card, you will be scrutinized. You should not, however, be discriminated against. 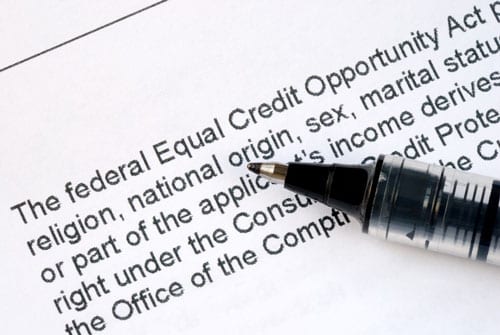