The calls came like clockwork, several times a week just as the Pinkuses were heading for bed. Each time, it was the same: a threatening voice with an even more intimidating message, one saying that unless the Pinkus family paid off a severely overdue credit card debt, wages would be garnished and arrest was likely.

Calls like that are not only scary, they’re illegal, yet you hear and read them about debt collection agencies all the time.

That is why Congress enacted the federal Fair Debt Collection Practices Act, a 1977 law that prohibits third-party collection agencies from harassing, threatening and inappropriately contacting someone who owes money.

U.S. debt collection agencies employ just under 130,000 people through about 4,900 agencies. The accounting firm of Ernst and Young published a survey in November of 2017 that said that collection agencies earned $10.9 billion on the approximately $78.5 billion in overdue debts they collected. The federal Consumer Financial Protection Bureau says debt collection d that almost 35% of American adults, about 77 million people, are at some point the subject of their collection efforts.

The Ernst and Young survey said that health-care related debt accounted for 47% of debt collected. Student loans was next at 21% and credit card debt was just under 10%.

As borrowers fall behind, collection efforts expand. As debt collection agencies grow, so do the complaints. In 2015, the CFBC returned $360 million to consumers through unlawful debt collection enforcement actions and collected more than $79 million in fines.

The Federal Trade Commission uses the FDCPA to block debt agencies from using abusive, unfair or deceptive practices to collect from consumers. Though the law is clear, many collectors don’t play by the rules and complaints against them abound.

In House vs. Third-Party Debt Collectors

Debt collectors don’t necessarily represent the credit-card issuer, company or bank that lent or advanced you money. Some represent card issuers and lenders, but others bought your debt when the original lender gave up trying to collect. In both cases, they are within their rights to try to collect what they’re owed, but they must follow FTC rules in pursuing payment.

The law doesn’t apply to so-called in-house collectors. These are branches or departments of the company that originally loaned the money. Some banks use these in-house departments to collect debts in the early stages of default, only turning to outside collection agencies if the debt isn’t collected in a certain amount of time.

After a period, often six months, many original lenders sell their uncollected debt to other companies. Both outside collection agencies and companies that assume bad debt must follow FDCPA rules.

Rules of Engagement: What Collectors Can and Can’t Do

Borrowers are obligated to pay their debts or work with a nonprofit debt counselor or debt management firm to arrive at a repayment plan. But if you are a delinquent borrower, the law entitles you to privacy and respectful treatment. Specifically, no collection calls are permitted between 9 p.m. and 8 a.m. and none can be made to your workplace, if you aren’t allowed to take calls. The caller can’t use abusive language, threaten violence or arrest, nor can he talk about your finances with anyone not authorized to know about them.

The law extends other protections to those in debt collectors’ crosshairs:

Lenders want their money back, and often turn to independent collection agencies to put pressure on delinquent borrowers. FDCPA rules only apply to debt collectors, who either bought your debt from a lender or a third-party company that the lender hired to recoup owed money. Collectors may be collection agencies, attorneys and companies that buy delinquent debt from creditors to collect.

Rules for Contacting You

Notifying debt collectors in writing to stop contacting you is your right, and while it might make day-to-day living a little less stressful, it’s not a real solution. Creditors are still able to sue you if you fail to pay the debt, and they can contact you to let you know a lawsuit is coming.

Debt collectors may only contact you between the hours of 8 a.m. and 9 p.m. They may not contact you at your place of work, if you are not permitted to take personal phone calls. If you want to stop the phone calls altogether, you must send the collection agency and cease-and-desist letter. It is best to send it via certified mail with verification requested that the letter was received.

If you hire a lawyer, he will send the collection agency a cease-and-desist letter and the collector must contact the attorney and not you. If you don’t have a lawyer, the collector can contact other people, but only to discover your address and phone number, or to find out where you work. The outside sources — often called third parties — can generally be contacted no more than once. While talking to a third party, the collector is prohibited from discussing your debt. Only your spouse and your attorney can be brought into that conversation.

Proving a Debt is Due

Under the rules of the FDCPA, debt collectors are required to provide details about each debt they are attempting to collect by sending a written notice with the following information:

This is called the validation notice and must be sent to the consumer within five days of initial contact.

After that, you have 30 days to contact the debt collector — also by letter — and give reasons why you don’t owe the debt or why the amount is incorrect.

Sometimes a debtor owes money to several creditors, or more than one debt to a single creditor. Debts can also be resold multiple times, so the name of the creditor might change even though it’s the same debt. You should demand that the collector be very clear about where the debt originated and how much is still owed.

If the Debt Is Yours – If you’ve already paid it, be sure to include a copy of the cancelled check or bank statement. If you contest the amount of the debt, verification should include information about payments made, and interest and fees charged and/or waived.

If the Debt Stems from Identity Theft – Include a copy of the police report regarding identity theft. If you fail to respond within 30 days (known as the validation period) to dispute the debt, it will be assumed to be valid.

After receiving your letter, a debt collector may not renew attempts to reclaim the debt until it is verified, and proof of its legitimacy is sent to you.

The verification must include:

If the required information is not forthcoming, all attempts at collection must immediately cease.

The FDCPA contains a loophole for so-called in-house collections. An in-house collector is a branch of the bank, retailer or credit-card firm that originally made the loan or offered the credit line. Lenders often try to collect debts themselves in the early stages of a default, using their own collection agencies.

How to File a Complaint

If a debt collector hasn’t followed the FDCPA law, you can complain to law enforcement. Complaints can be made to you state attorney general’s office, the Federal Trade Commission and the federal Consumer Financial Protection Bureau. States often have their own collection laws to go beyond federal statutes. Contacting a state attorney general’s office is the best way to learn about what practices are illegal under state law.

It’s always advisable to keep records of all contact with debt collectors. If you talk to one on the phone, write a note after the call describing what you discussed. If you write a letter, send it certified mail with a return receipt. Keeping thorough records is the best way to document a violation.

Actions Consumers Can Take Under the FDCPA

If you believe a debt collector has violated the law, take action. You reserve the right to sue a collector in a state or federal court within one year from the date the law was alleged to be violated.

If you prove that you suffered damages like lost wages or medical bills as a result of illegal collection practices, a judge can order the collector to pay to cover the damages. Even if you can’t prove actual damages, the judge can order the debt collector to pay you as much as $1,000. A group of people can sue as a class and potentially recover as much as $500,000, or 1% of the collector’s net worth, whichever is lower.

Again, keep records. A log of phone calls, voicemails, text messages and letters can be persuasive evidence to a judge or jury. Taken together, the records can show a pattern of behavior.

The FTC advocates for consumers to prevent deceptive and unfair business practices. Many states have their own debt collection laws that may differ from and strengthen the federal Fair Debt Collection Practices Act.

Because of this, it is important to reach out to your state attorney general’s office to determine your individual rights under that law before pursuing legal action against a debt collector.

What If a Debt Collector Sues Me?

If you are sued over a debt, make sure you, or your lawyer, appear in court on the scheduled date. If you don’t make an appearance, the judgment automatically goes against you and the collection agency will have a legal recourse to continue trying to collect.

If you feel like the collection agency has violated the law, respond with your own lawsuit by the date specified in the court papers. This is important to preserve your rights. 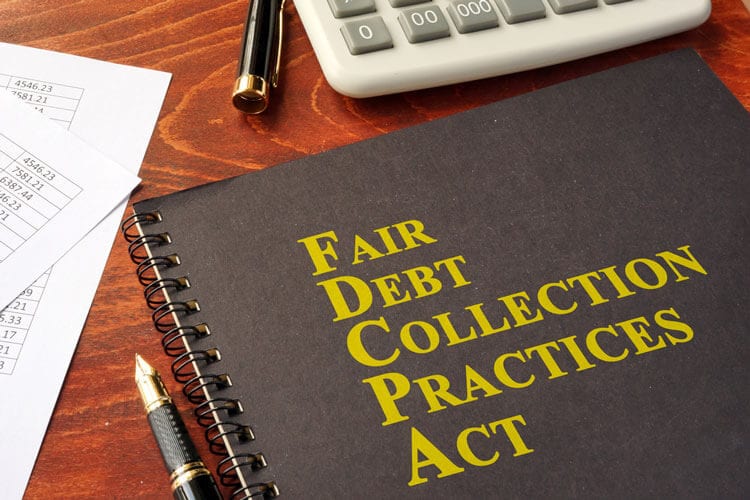