Teens see a driver’s license as a ticket to adulthood and adventure while their parents likely view it as a torpedo aimed at their household budget. The cost of adding your kiddo to your car insurance policy can be jaw dropping. If there’s an adolescent driver in your future, brace yourself.

To offset the increased risk, they’ll add hundreds of dollars to the cost of your policy. It might not seem fair that a novice driver with no traffic violations is judged a dicey proposition, but you will never win that argument with an insurer. The best you can do is shop for a policy that covers your needs at the lowest cost.

Does Your Teenager Need Insurance to Drive Your Car?

Once a teenager passes a driver’s test and receives a license, insurance is usually mandatory for a child who drives your cars. You should contact your insurance company before your child applies for a learner’s permit to review the requirements. In most states you won’t have to add the teen to your policy at that point since they are required to have a licensed driver chaperoning their training. The situation changes when the student driver becomes fully licensed or turns 18.

In most cases, families add teen drivers to the parents’ policy. Some states allow a licensed teen to be excluded from the parental policy, but most don’t. Even if getting a separate policy for the teenager is possible, it is probably not practical since most states prohibit teenagers under 18 from having a title to a car in their own name. If you state allows a minor child to take title to a vehicle, it might not be possible for the teen to get insurance. Insurance is a contract and a minor isn’t old enough to sign one.

Cost of Adding a Teen to Your Insurance

Adding a teenager to your auto insurance policy is very expensive. Your annual premium can easily double when a newly licensed 16-year-old joins the policy, though the cost varies by state and areas within states. Not all policies are the same, however, and the cost might be somewhat less if you don’t have full coverage – a package that includes $100,000 in liability coverage for others injured in an accident with a total payout capped at $300,000 per accident, $100,000 for damage you might cause to another’s property or vehicle and comprehensive to insure against damage to your car.

Though it might be tempting to buy a policy that covers less, it increases your risk if you are in a serious collision. Most state’s have a bare bones requirement and insurers will write policies for smaller amounts of coverage. If you own an older car that has lost much of its value through depreciation, you might consider dropping comprehensive and collision coverage and taking the risk of repairing damage on yourself.

If your child routinely earns high grades, you might get a discount. Girls often cost slightly less than boys to insure. The cost usually will drop each time your child celebrates a birthday. But no matter how you cut it, insuring a teenager will greatly increase your auto insurance bill. For example, an analysis of California rates found that drivers pay an average $1,783 a year for full coverage and $5,660 when a teen is added to the policy.

How to Afford Car Insurance for a Teenager

Given the high price insuring young drivers, it can be difficult to afford car insurance. It pays to explore every option for lowering rates. If your student maintains good grades, drives an older, no-frills car or is away at college, the cost of insurance can be substantially lower. It’s important to know what discounts are available and tell your insurance company if you have a qualifying circumstance.

Shop for insurance just like you would any other product. That means doing online research and getting at least three quotes if you are considering changing carriers. You should contact your insurance company before your child gets a learner’s permit even though you probably won’t have to add them to the policy until after they are fully licensed.

If you own more than one car, you should consider making the child the primary driver of the cheapest car. This could save some money. If you are changing providers, ask about available discounts.

Though saving money is laudable, it can prove pennywise and pound foolish if you’re under protected. Always consider a full coverage package with $100,000 liability coverage for other injured in an accident with a minimum of $300,000 per accident. Remember that you are liable for any accidents your teen might have on your policy so make sure you have sufficient protection.

You should also consider buying a supplemental policy in addition to car insurance, a move that will give you added protection. Umbrella policies are extra protection, covering liability in excess of what is typical in standard auto policies. They are also relatively inexpensive. A $1 million or $2 million umbrella policy can usually be purchased for several hundred dollars a year.

Cheapest Car to Insure for a Teenager

Remember that cheapest isn’t always the best, particularly when insuring a novice driver. Since your child’s safety is paramount, only consider cars that meet current standards. Features like airbags, anti-lock braking, backup cameras, blind-spot monitoring and stability controls will not only keep your child safer but could also yield insurance discounts.

If you’re buying a car for your teen, consider an older model in good mechanical shape that doesn’t scrimp on safety. You should avoid sports and high-performance cars which might encourage your child to drive too fast and add to insurance costs. Consider a larger car or an SUV, which might prove safer in a crash. Remember, what your child might consider very cool wheels might not be the safe car you’re comfortable buying.

You can also check the Insurance Institute for Highway Safety’s list of safe cars for teen drivers. Buying an older safety-rated car can save money if you insure it separately since it is often practical to skip collision and comprehensive coverage,

Teenagers are extremely expensive to insure because they are, as a group, the most accident-prone drivers on the road. Car crashes are the leading cause of death for teenager in the United States. In 2017, 2,364 teens between the ages of 16 and 19 were killed in crashes and 300,000 were went to emergency rooms with injuries.

Insurance rates fall for each year a teen grows older. Why? The crash rate for newly licensed 16-year-olds was 1.5 times higher than for drivers aged 18 and 19. The youngest drivers are among the least capable of recognizing conditions that can lead to serious accidents, they are less likely to wear seatbelts than older drivers and they are inclined to drink and drive.

Parents and guardians shouldn’t forget how vulnerable new drivers are and should take time and have patience instructing their children as they learn to drive. You should emphasize the danger of drinking and driving, tell them not to have more than one underage passenger in the car at a time and not to talk on a cellphone or text when behind the wheel.

Even if you are a great instructor and your child is a cautious driver, insurers rely on the law of large numbers when setting rates. Teenagers as a cohort continue to be accident prone and as long as that’s the case, insurance rates will reflect the greater risk they pose on the road. 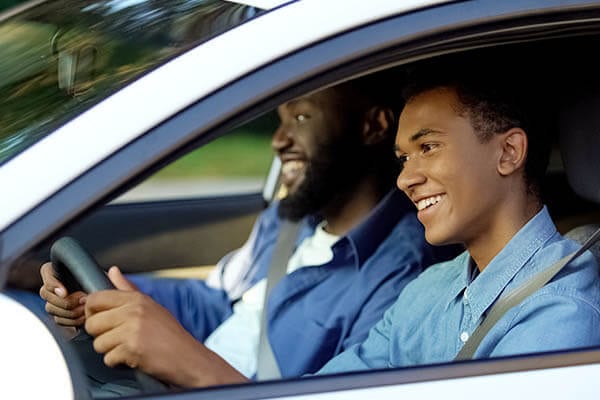 Home > Blog > Adding a Teenager to Your Car Insurance Policy