How Do You Dispute a Credit Card Charge?

A credit card issuer shocked an Orlando woman recently when it called asking about unusual activity on her account — several hundred dollars’ worth of groceries and home improvement items recently purchased at multiple local businesses.

While she sometimes shops at the stores mentioned by her credit card company, in this case she wasn’t the customer.

She was the victim.

The woman immediately refuted the charges and received the best customer experience of all.

“Both companies removed all the charges,” she said. “[It] took maybe 10 minutes. I imagine they could make the process more complicated if they wanted to, but I’m glad it was pretty easy to deal with.”

Despite anecdotal evidence of increased identity theft and credit card fraud, credit card issuers say chargebacks aren’t that common. Less than 1 percent of Visa’s $2.07 trillion in transactions from September 2011 to September 2012 resulted in disputes, according to a January report in The New York Times. MasterCard reports a similar percentage.

None of the major credit-card issuers provide a breakdown of reasons, but Visa shows that most chargebacks arise from customer disputes, fraud, processing errors, authorization issues and other types of identity theft.

While money typically ends back in your account after a dispute, the hassle of sifting through paperwork to find receipts and spending valuable time on the phone with credit card issuers can seem like a Ping-Pong match that never ends.

Before you start the process, you should learn how a chargeback works, the laws that protect you and how to protect yourself from questionable charges before they make a negative mark on your credit report.

Why Do People Dispute Charges?

Disputing credit card charges involves many factors and can get a little messy.

The main players in the dispute process include you (the cardholder), the credit card issuer, the merchant that received payment, the merchant’s bank, details of each specific purchase and the federal laws that protect consumers.

Credit card charges are disputed for a variety of reasons:

The Fair Credit Billing Act of 1975 entitles you to dispute these types of charges, provided certain requirements are met and the mistake is reported to the credit card company within 60 days from when the questionable billing statement is mailed. Although your personal liability is limited to $50, many larger companies will waive this cost as a courtesy.

The Consumer Finance Protection Bureau, which oversees a portion of the nation’s debt-collection industry, also handles its fair share of credit card disputes. If your credit card issuer does not resolve the dispute or if you disagree with the issuer’s decision, you can submit a complaint to the CFPB. They will provide you with a tracking number and alert you on how the issuer is handling the complaint. 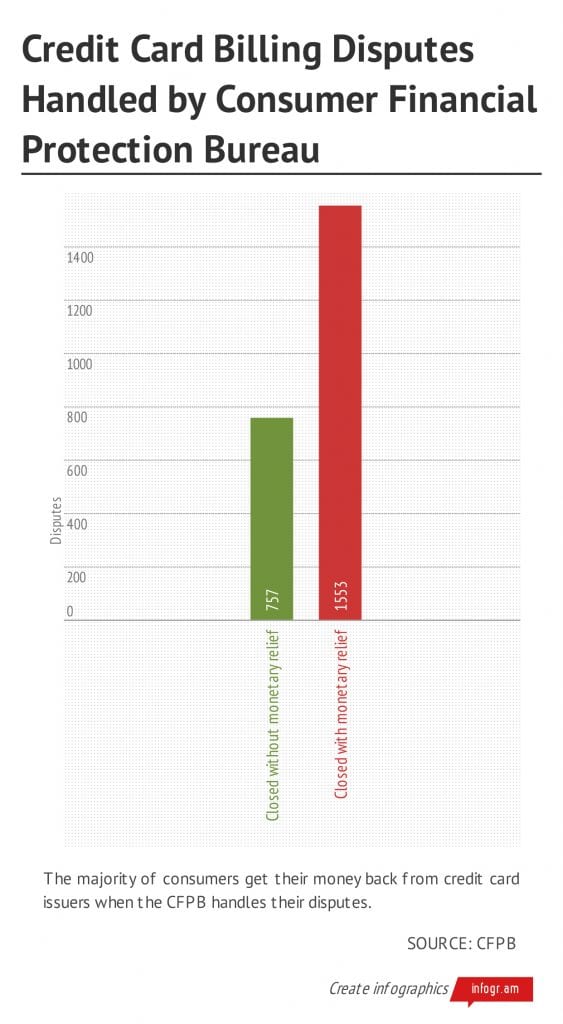 The CFPB database shows the agency has handled 19,433 credit card complaints since March 22. Records show most credit card disputes end with the consumer getting their money back.

While every case is different, here’s a guide to understanding the dispute process. There are a couple rules of thumb here.

First, this is going to take some work on your part. You have to make the calls, write the email, pen the letters. It’s your credit and your money, so this is your assignment. Accept it and move forward with the process.

Second, document everything. Keeping your trails of sent and received emails is easy. It gets tough when you have to remember to write down the date and time of phone calls and when you have to keep copies of letters you write.

One tip: remember to write down the names of people you talk to. You never know how valuable it can be when you can say, “Yeah, well, I talked to Nicole on the afternoon of March 11 and she told me to do exactly what I did.”

First, you want to determine any possible reason the charge may have been made in error. Did you forget making the purchase? Do you recognize the name of the merchant? Did you save a receipt from the purchase? You want to make sure there is a case for disputing the error. The more thorough you are in researching the error, the better your credit card company will be able to present your case to a merchant.

As you prepare to address the charge, make sure you organize the information you want to go over. Gather your account number, amount to dispute, time and place charge occurred, date of the billing cycle which includes the charge and the reason for the dispute.

Before contacting your credit card company, seek to resolve the issue by speaking with the merchant. Record the name of the person you speak with, as well as the date of the phone call. If the person on the line cannot help, ask to speak with a manager. If a merchant does not provide a solution, move on to your next step.

Call the number on the back of your credit card to speak directly with the issuer. You can typically report the charge by phone, mail or filling out a form on your issuer’s website. Be sure to act quickly as you have 60 days from when the billing statement was sent out to call in the dispute. Some disputes can be addressed over the phone, while others require an exchange of emails with the company until it completes its investigation. If you choose to dispute the charge over the phone, follow it up with a letter to the credit card company.

To view a sample of what a dispute letter should look like, visit the Federal Trade Commission website. If you are physically mailing the credit card company, make sure that you use the specific billing dispute address provided on their website.

Don’t skip your monthly minimum payments. You don’t want to add late payment charges or credit score dents to the situation. Remember that during the investigation you are not responsible for the disputed cost or the interest associated with the charge. If an amount is in dispute the creditor cannot report that charge as late to a credit bureau or charge interest on the amount.

Wait for Them to Investigate Your Dispute

If you sent a written letter rather than calling, the company should mail you a written confirmation that they received your notice within 30 days. That notice means your credit card company is investigating your claim and could take up to 90 days or two billing cycles to complete the process.

For smaller disputes, your credit card company may simply refund the charge, rather than conduct an investigation. Usually these refunds can be completed immediately.

If your dispute is denied, which occasionally happens, you can request an explanation and appeal the dispute. However, you only have 10 days to make your appeal. Another option is to report the incident to the Federal Trade Commission, the Consumer Finance Protection Bureau or the Better Business Bureau.

There are some exceptions to the process.

For example, disputing charges you already submitted a payment for are difficult to remove. If it is a claim about the quality of goods and services, there are some restrictions.

If you pay with a debit card, the credit act does not apply, but you do have rights based on other consumer protection laws. You may also have signed a pre-existing contract with a merchant not to dispute charges.

Always read the fine print in lending agreements for major services and consider whether you should work with credit card issuers with these types of caveats.

Protecting Yourself from False or Incorrect Charges

You can protect your account and prevent multiple fraudulent charges from sneaking through by making certain that your credit card company has your updated phone number and email address. The easier it is to contact you, the sooner the matter can be resolved.

Creating a paper trail will also help your case. Your argument is much stronger when you’re holding the actual receipt that shows your purchases. Your credit card company can also validate your signature to help recognize fraudulent activity.

If your card is the next to get hit, know your rights and eliminate that charge as soon as possible.