For most men, the goal of Valentine’s Day has not changed since the holiday was more or less invented by the Romans a few thousand years ago.

The Romans called it “Lupercalia,” and it was a pagan fertility festival celebrated from Feb. 13-15. Historians suggest that men and women did some eating, drinking and, um, “fertilizing” for three days, and everyone went home happy.

Lupercalia would play just as well today, except the rules changed. A Pope, of all people, renamed it Valentine’s Day and then greeting card companies, candy factories and jewelry stores got involved. Now it’s just another chance for florists to make a buck.

Most men understand that. They also understand that of all the manufactured holidays we have, this is one we can’t afford to ignore. The currency of love on Valentine’s Day runs directly from a man’s wallet to a woman’s heart, and if you doubt that for a moment, let me introduce you to the National Retail Federation.

The NRF accounts for every dime spent on retail merchandise. Their accountants work overtime on Valentine’s Day. They looked at last year’s receipts and figured Americans spent $18.6 billion on cards, candy, roses, jewelry and dinner at whatever restaurant has an open seat, if you can find one.

The NRF even counted how much of everything we bought in 2013 so retailers would have at least eight billion conversation hearts, 233 million roses, 35 million heart-shaped boxes of chocolate and somewhere around 200,000 engagement rings sitting on the shelf for the big day this year.

When NRF’s accountants examined last year’s spending, they arrived at this not-very-astonishing conclusion: Men outspent women 2-to-1. To be precise, men forked over an average of $175.61 to show their love for her, while the ladies shelled out $88.78 for him.

Those are not frugal numbers. I’m confident that if my wife and I combined to spend the “averages” of $264.39 for Valentine’s Day, Cupid’s Arrow would indeed go through my heart . . . and send me straight to the emergency room.

I don’t want that, and (at least for now), neither does she. The goal is to demonstrate affection without causing a heart attack. Put some thought and passion into the day. Make an effort that shows you really care.

And get the deal done for under $50 combined. Here’s how.

Have an (Inexpensive) Plan

This year’s plan is to:

I’ve been doing this for 25 years with varying degrees of success, so let me say up front: This is a frugal plan, not necessarily a foolproof plan.

That leaves her $16 and change to spend, which comes out to almost exactly the 2-to-1 spending ratio the NRF suggests is common in America.

Maybe I can get her to spend it on fertilizer. 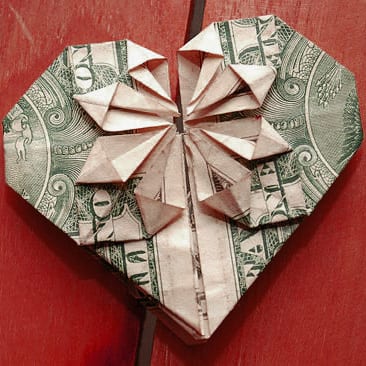