In this article, we'll give you information that should help you decide between debt settlement and bankruptcy, but if you would like more personalized information, an experienced attorney can evaluate your situation.

When you’ve reached the end of your rope, goes the maxim, tie a knot and hang on. Good advice if you have rope left. If not, and if what little bit of the rope you have left is unraveling as you squeeze, it may be time to grab hold of debt settlement or bankruptcy.

Spoiler alert: You won’t enjoy either one. Debt settlement and bankruptcy are considerations only for consumers who cannot budget their way out of debt, even after slashing expenses and adding second-job income; cannot score some sort of debt consolidation loan, including a cash-out refinancing of their homes; and don’t qualify for debt management programs offered through nonprofit credit counseling companies. If you have not explored any of the avenues mentioned above, look into them before reading further.

However, if you’re at the brink of disaster, the thing to do is choose the wisest of available options. Selecting the right option for you begins with knowledge. And that begins here. 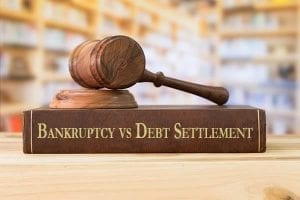 Let’s first acknowledge the slim similarities between debt settlement and bankruptcy: Each is designed to erase or forgive certain types and certain amounts of debt.

Also, at the end of each, your credit score will have absorbed a hammering.

That’s pretty much it. Beyond that, the two processes are remarkably different animals.

Personal bankruptcy falls, generally, into two types: straight liquidation of assets (Chapter 7) and reorganization (Chapter 13). Both go through the court system where a judge, ultimately, decides the outcome. Both also become part of the public record.

Once you have qualified for bankruptcy (even if your financial straits are dire, bankruptcy is not guaranteed; more about that below), creditors must stop hounding you for money.

That’s not the case with debt settlement. During the process — usually between 24 and 48 months — collection calls and mail demands continue, along with late and, possibly, over-limit fees continuing to accrue, with no guarantees they’ll reach successful outcomes.

Debt settlement — also known as debt negotiation and debt arbitration — must never be confused with credit counseling and debt management programs. In debt settlement, you or your representative attempt to get creditors (usually credit card issuers) to accept a portion of the total balance as payment in full.

Individuals can try negotiating for themselves if they have access to substantial amounts of cash. The cash will be used to pay a substantial portion of their account balances — somewhere in the neighborhood of 40-70 percent.

When cash is scarce, debt settlement candidates turn to outside representatives who usually take the following steps to reach a settlement:

“If you can settle your debt,” says attorney Andrew Taylor, “we would generally suggest you do so, although it can be more lengthy than bankruptcy.

“If time is not on your side nor do you have the funds in which to pay the lump sum required to settle your debt,” he adds, “then bankruptcy will be the best (in fact only) solution for you.”

Additionally, a bit of homework is encouraged. “Not all debt settlement companies are created equal,” says Liverpool, N.Y.-based credit industry analyst Greg Mahnken. “Be sure to read reviews and understand all of the costs and terms of your agreement before enlisting a debt settlement company to help you.”

There definitely are some things to like about debt settlement, such as:

Keeping it simple, if the company eliminates $10,000 in debt and charges a 25% fee, you’ll pay $2,500. Because your rep knows you’re not a reliable credit risk, that fee will come straight from your escrow account (managed by a third party that typically charges fees).

Make certain, before you sign on, you know whether you’ll be charged based on your total debt, or the amount of the debt reduced. The difference could be staggering.

Understand, too, the effect of late payment fees, over-balance charges, and other penalties listed in the fine print of your lending agreement.

Who It’s Best For

Simply put, if you have a mountain of unmanageable debt and bankruptcy is not an option — you can’t qualify for bankruptcy, or you absolutely cannot bear the stigma — debt settlement could be your best option.

That’s certainly true if you have access to substantial sums of money (the do-it-yourself model), or you have the stomach for keeping creditors at bay while you amass the cash to make credible offers.

Also known as “liquidation bankruptcy” or “straight bankruptcy,” Chapter 7 filings tend to be what we have in mind when talk turns to bankruptcy.

You gather your financial records — bank statements, loan documents, pay stubs, credit card statements — and complete a bankruptcy petition, statement of financial affairs, schedules, and other required documents to be filed with the court.

Once approved, your assets — except for certain “exempt” property retained to assist your “fresh start” — are sold by a court-appointed trustee, with the money distributed to creditors who have filed legal claims.

In the end, the debts addressed by your straight/liquidation bankruptcy (exceptions apply) vanish.

“Bankruptcy,” says attorney and CEO of LegalAdvice.com David Reisher, “provides considerable relief for anybody overwhelmed with unsustainable levels of debt.”

The feeling of financial relief is one positive with Chapter 7 bankruptcy, but not the only one:

There are many and each needs your consideration.

There’s a bitter irony about personal bankruptcy: You may be too broke to afford it.

Chapter 7 bankruptcy can be pricy. Court fees run $335. The average lawyer’s fee tops $1,100, with some cresting above $3,000. (You want professional representation; filers who represent themselves are far less likely to get the debt relief they seek.)

Take it from a pro:

“Lawyers are baffled by clients,” says Dai Rosenblum, who has practiced bankruptcy law in rural western Pennsylvania for over 25 years. “If someone is leaking blood, they don’t hesitate to go to a doctor.  But if they’re leaking money, they won’t go to see a lawyer except as a last resort.

“Without legal advice,” Rosenblum says, “many take assets that are completely exempt, such as 401(k)s, and pay on debt that they don’t have to.”

Because a successful Chapter 7 filing wipes out most of a consumer’s debts, attorneys usually require payment up front. Otherwise, in most states, their fees may be uncollectible.

Check with the court to see about having fees waived, or arranging a payment plan. Find out whether your state allows making other than upfront payments to your attorney.

Again, if you have any doubt whether personal bankruptcy is right for you, check with a nonprofit credit counseling service first.

When to Consider Chapter 7 Bankruptcy

Chapter 7 works best for people who:

“The pros are low cost, over in a few months start to finish, and in a weird way, bankruptcy improves your credit,” Rosenblum says.

“All the debt that used to be on your credit report goes away forever,” he adds. “This tells a potential new lender that it will be easier, not harder, to make future payments.”

In Chapter 13 bankruptcy — also called “a wage earner’s plan” —  consumers do not see their debts wiped clean; instead, they are reorganized under a repayment plan that stretches from three to five years. Some creditors may be repaid in full; some may not.

Similar to a debt management plan, a Chapter 13 bankrupt pays a monthly sum to a trustee, who, in turn, distributes payments to creditors according to priorities set by the court.

“Because you pay back at least some of what you owe,” says Gina Pogol, a personal finance specialist with MoneyRates.com, “it’s considered a bit more respectable when you apply for credit in the future.

“Chapter 13 bankruptcy offers all of the benefits of a debt settlement plan, but you also get tax-free debt forgiveness, all interest and fees stop piling up, collection efforts stop and when you’re finished, you are free of debts.”

Debtors who earn too much to qualify for Chapter 7 may yet score bankruptcy protection under Chapter 13. This means, among other things, calls and other contacts from creditors and collections agencies stop the moment the application is filed. Other plusses include:

The filing fee for a Chapter 13 bankruptcy is $310. There’s also a credit counseling charge that runs around $50, plus a debtor education course ($50-$100) to receive a discharge.

Bankruptcies are legally complicated. Navigating through a Chapter 13 on your own is ill-advised, but an attorney will be costly, somewhere between $2,500 and $6,000. Luckily, the structure of Chapter 13 bankruptcy allows the arrangement of a payment plan.

If you’re particularly squeezed, check with the local bar association about lawyers who do pro bono (free) representation. Also try getting in touch with a nearby legal aid office.

When to Consider Chapter 13 Bankruptcy

In short, if you have above-the-median income, you could meet your obligations if they were reorganized, and there are certain things with which you cannot bear to part — your inherited Rolex or vintage Corvette — but you’re otherwise in way over your head, Chapter 13 is for you.

At this point, you may feel that neither bankruptcy nor debt settlement is the solution for you. And you may be right. A debt consolidation loan may be what you need. Also, a debt management plan enables you to pay off your debt because a credit counselor negotiates with your creditors to reduce your interest rate, waive fees and create a payment plan that works. If you want to explore all your debt relief options, speak with a credit counselor.