But bankruptcy doesn’t have to be all that and never has been, thanks to exemption laws designed to protect personal property and keep deeply-indebted people afloat. If they’re smart and honest about claiming bankruptcy exemptions, a vast majority of people can use Chapter 7 bankruptcy to get rid of all their debt while they keep all, or almost all, of their property.

Those cases are called “no-asset cases,” because the person filing for bankruptcy has used the available exemptions to stop the bankruptcy trustee from selling any property or assets to pay off creditors. If you qualify (more on that in a moment), it works. More than 90% of people filing a Chapter 7 bankruptcy are able to keep all of their property, according to Ed Flynn of the American Bankruptcy Institute.

The logic behind assets that are exempt from bankruptcy is this: Society wants you to continue to work (and pay taxes!), and that is difficult to do if you lose your car, your clothes, your home and everything in it to the people to whom you owe money.

“If you make a debtor completely destitute … they’re never going to get back on their feet and be able to be a productive member of society,” says Kate Nicholson, a bankruptcy attorney in Cambridge, MA, who represents debtors, trustees, secured lenders, unsecured creditors and even creditors’ committees in consumer bankruptcy cases. “So exemptions are designed to protect the kind of property that people need to get by. And the fact that so many cases are no-asset cases tells you that people are already just barely getting by.

“It’s not that people have boats or second homes or Harley-Davidsons or other things that would be harder to protect in bankruptcy. People live to the extent of their means, and it’s really just enough to get by.”

When you have nowhere else to turn to keep your creditors at bay, filing for bankruptcy and claiming the right exemptions can be a way out. With the right guidance, you can emerge from personal bankruptcy with your debts gone and your property still in your possession.

What Are Bankruptcy Exemptions?

Basically, people filing for bankruptcy need to keep certain essentials on hand to function as productive members of society. Bankruptcy exemptions allow those people to protect that essential property from the bankruptcy trustee who otherwise could seize it and sell it to get back the money the creditors are owed.

There are laws on both the federal and state levels about what assets are exempt from bankruptcy, and how much you can claim for them. Most states require a filer to use the state exemptions, though some states provide a choice between using the federal or state version. The law does not allow the two versions to be combined.

Most states, though, share common exemptions, which we’ll list a little later, even if the limits on those exemptions can differ tremendously.

Exemptions come into play (but have different roles) in Chapter 7 and Chapter 13 bankruptcies, the two most common types of personal bankruptcy filings.

A quick definition, first, of a Chapter 7 bankruptcy. It’s a legal maneuver to get out from under many types of unsecured debt for people who can no longer afford monthly payments.
As soon as you file for Chapter 7 bankruptcy, a court order stops creditors from taking action against you, including collecting payments or repossessing your property.

The court takes legal possession of your property and a court-appointed trustee begins the process of selling any assets not covered by exemptions, with the proceeds going to creditors. For that reason, Chapter 7 is called a liquidation bankruptcy. As many of your possessions as possible are liquidated (converted to cash) to pay off your debts.

But Chapter 7 bankruptcies don’t involve as much liquidation as people commonly think, thanks to the available exemptions.

“If you haven’t been through it before, if you don’t know someone who’s been through it, if you aren’t a bankruptcy lawyer, people just don’t understand the process. So, a lot of people are surprised that they’re going to get rid of all their debt and they’re not going to have to pay anything or lose anything. It’s like, ‘Is this for real?’”

The value of your assets and the exemptions you claim determines how much of your property you can keep. But as we’ve noted, most people in Chapter 7 who qualify keep all, or nearly all, of it because the trustee isn’t allowed to sell exempted property.

You qualify for Chapter 7 if your monthly income over the six months before you file has been less than the median income in your state for a household of the same size. That number can be a moving target, so you’d be wise to consult a debt relief counselor or a bankruptcy attorney as you consider your options.

Getting help with your exemptions makes sense, too, if you qualify. The paperwork involved in a Chapter 7 bankruptcy requires that you list all your property and what each item is worth. Then you’ll need to know what the exemption limits are in the state in which you are filing. If your state’s exemption rules cover the value of the item, you can keep it.

In Ohio, for example, the exemption for a motor vehicle covers value up to $4,000, which is what the federal exemption is as well. In New York, the motor vehicle exemption is $4,825 (or up to $11,975 if the vehicle is equipped for use by a disabled debtor). Colorado allows a bankruptcy filer to exempt up to $7,500 for a motor vehicle, and the Idaho limit is $10,000. In Vermont, on the other hand, you can only protect up to $2,500 of equity in a car, van, motorcycle, truck or other vehicle.

If you’ve invested $5,000 of your own money in your car, then, you could keep it in a Chapter 7 bankruptcy filed in Idaho or Colorado. But in Ohio or New York or Vermont, where the exemption limit is lower than the value of the car, the bankruptcy trustee could take your vehicle and sell it. You’d get the amount of the state exemption back in cash. The rest of the proceeds of the sale would be distributed to your creditors.

Even under those circumstances, though, the exemption system provides ways that you might be able to keep your car. Many states allow a wild card exemption to be applied to anything, including adding it to another exemption. You can use the wild card, then, to make up the difference between the state’s motor vehicle exemption limit and the equity you have in the car.

Another way: If you don’t use the homestead exemption (the claim to cover the value of your house) or only need part of it to protect the equity in your primary residence, you can apply it – or what’s left of it – to any other property such as a car.

Part of the Chapter 7 bankruptcy process is a meeting with the court-appointed trustee and creditors after you’ve assembled and filed the paperwork, including your exemption claims. If there are no objections, the exemptions become final a month after that meeting.

Another way to differentiate Chapter 13 from Chapter 7 is that in a Chapter 13 bankruptcy, you keep everything – all your property – under a court-approved debt reorganization plan that lasts three to five years. If you stick to the plan and regularly make the payments, you keep control of your possessions. If you are facing foreclosure on your house, a Chapter 13 filing stops it in its tracks as long as you make future mortgage payments under the debt reorganization plan.

Chapter 13 bankruptcy is the option for debt-ridden people whose income is too high to qualify for Chapter 7 and whose debts are below a maximum total of just under $400,000 for unsecured debts and $1 million for secured debts.

The debt reorganization plan is based partly on the income you have left after you’ve paid for the essentials of living – your disposable income.

The exemptions that can be claimed in Chapter 13 are the same that are available to a Chapter 7 filer, but they are used differently. In Chapter 13, exemptions aren’t needed to keep from losing property. However, they are important in determining how much each monthly payment will be in the debt reorganization plan.

The non-exempt total is divided by the number of months (between 36 and 60, or three to five years) in your repayment plan to get to your monthly payment sum.

“Say someone has an asset that they really don’t want to part with, or they’re kind of close to that exemption (limit). You can always file a Chapter 13 and pay creditors the value of your non-exempt property over five years, and keep it,” says Nicholson. “You don’t have to liquidate.”

Making smart decisions about how to use exemptions is important in a Chapter 13 bankruptcy. They can make the repayment plan much easier on your finances.

What Assets Are Exempt from Bankruptcy?

Bankruptcy exemptions can include most of the clothes in your closet, too, because, well, you really ought to be wearing something when you’re tickling the ivories in the nightclub.

Other assets that are exempt from bankruptcy can include:

Anything that isn’t protected in bankruptcy is considered non-exempt and, in Chapter 7, can be sold by the trustee to pay off creditors. In a Chapter 13 bankruptcy, the value of non-exempt property is used to determine how much the filer will have to pay creditors whose debt isn’t guaranteed by collateral.

Generally, non-exempt property can include:

“You want to know before you file the case if there are any non-exempt assets … because people have claims they don’t think about,” Nicholson says. “You’re suing somebody; maybe there’s a personal injury claim. Maybe they’re the beneficiary of a trust or have some future right to property. They don’t really think that’s there’s, right? But the trustee certainly does. People need to be prepared.”

Chapter 7 bankruptcy rules provide several ways for a filer to keep a non-exempt asset from being liquidated. If it’s important to you, you can try to convince the trustee to accept an item of exempt property in its place, or you can offer to re-buy the item from the trustee.

Sometimes, the trustee deems a piece of non-exempt property to be too difficult to sell, or not valuable enough to make its sale worthwhile for the creditors. In that case, the trustee will file a Notice of Abandonment and formally give the item back to you.

If you are unsure if one of your assets is exempted or non-exempted, you can get guidance from a debt-relief specialist. You can also check your state’s exemption list. If the item isn’t on that list, it’s non-exempt property.

If you are still overwhelmed by the details involved, it’s always a good idea to get a consultation from a bankruptcy attorney. In most cases, a consultation is free. The attorney can tell you what your options are and what it will cost to pursue them. 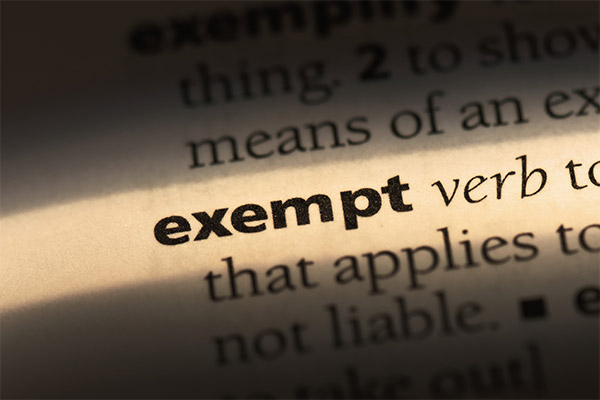