The study was done by Experian, one of the three largest credit bureaus in the U.S., and said the average American dies owing $61,554. Throw mortgages out of that equation and the debt load shrinks to $12,875, which doesn’t seem like much unless some debt collector starts calling you day and night trying to collect it.

The good news for relatives of the deceased is that while you can’t take money with you, you can take debt to the grave. Relatives are not responsible for the deceased member’s debt, unless they co-signed for a loan, credit card, have joint ownership of a property or business or live in one of the nine community property states: Arizona, California, Idaho, Louisiana, Nevada, New Mexico, Texas, Washington and Wisconsin.

Although legal structures exist to help surviving family members handle these situations, many of us aren’t well-read on the subject. When you encounter debt collectors who want you to pay a dead relative’s debts, you may not know the facts on how the American legal system views this financial responsibility.

The Federal Trade Commission maintains a straightforward guide on its website regarding the rights and responsibilities of surviving family members. As the FTC points out, a general set of standards called the Fair Debt Collection Practices Act applies to this situation. What the FTC guide shows is that, apart from some specific instances involving co-ownership of assets and debt, surviving family members usually don’t have to pay the debts of someone in their family who has died.

In most cases, existing debts are paid from the dead person’s estate. An estate is the sum of the assets of an individual. Those could include things like a home, a car, a boat, a stamp collection, jewelry, a bank account – just about anything that is money or could be turned into money by selling it.

If someone dies with outstanding debt owed, the assets in an estate are sold and the money is used to pay off those debts.

Requests for payment go to the person in charge of the estate, who is either an attorney or an executor specifically named in the deceased’s will. The executor is responsible to pay the debts out of the estate.

Not every asset someone owns is up-for-grabs when they die. The law divides the deceased’s assets into exempt and non-exempt categories, with the primary distinction being that exempt assets can’t be liquidated to cover debts.

The list of exempt assets varies by state, but two major assets are exempt everywhere: retirement savings and life insurance policies. Those two assets can be distributed to beneficiaries without regard to debts owed by the deceased.

Some states designate other entities as exempt so it’s wise to check the laws where you live. Florida, for example, says the surviving spouse or children has the right to exempt household furniture and appliances up to a value of $10,000 as well as two automobiles.

Assets that are non-exempt, meaning available to be liquidated and used to pay off debts, would include a house, car, boat, bank account, artwork, stamp or coin collection or anything that has enough value to be sold.

Timespan for Creditors to Make Claim

Creditors in search of payment must present their request in writing during a prescribed time frame, which varies from state-to-state.

For unsecured debts, the time limit ranges from 3-6 months in most states. State laws require executors to post notice of the death, either in a newspaper or directly to known creditors to give them a chance to file a claim.

No claims are accepted after the time frame has expired.

Do You Have to Speak to Debt Collectors?

Debt collectors know that the family members of a deceased person have no obligation to pay off debts that person may have accumulated, but that doesn’t stop them from trying to collect anyway.

It is not unusual for debt collectors to use the same tactics they are infamous for – badgering, harassing and intimidating – on relatives of the deceased, hoping somebody caves in and pays the debts. All they care about is the money.

Executors and family members can block debt collectors from harassing them by sending them a cease and desist letter or hiring a lawyer and directing all calls to the law office.

However, the estate still owes the debt. If you are the executor, it’s your responsibility to figure out how to pay creditors by drawing on the money and holdings in the estate when the owner died.

It is NOT your responsibility to use your own money to pay off those debts.

Some creditors don’t even bother to file a claim, choosing instead to go directly at the most vulnerable members of the family. If creditors continue to harass you for payment as a family member, write a letter or contact your attorney to write one on your behalf to demand they stop all contact. Under the Fair Debt Collection Practices Act, creditors aren’t allowed to discuss someone’s debt with relatives, neighbors or friends.

What Happens If the Estate Is Insolvent?

It does not happen often, but there are times when the owner of an estate dies and with more debt than assets, meaning the estate is insolvent. When this happens, the deceased’s family members will not receive any inheritance, but still aren’t responsible to pay off any debts.

The process remains the same – any assets are sold with the money going to pay off debts – but a priority order is established. Claims filed within a six-month timeframe of the estate being opened are usually paid in order of priority. Typically, fees — such as fiduciary, attorney, executor and estate taxes — are paid first, followed by burial and funeral costs.

If the deceased member’s family was dependent on him or her for living expenses, they will receive a “family allowance” to cover expenses. The next priority is federal taxes. Medical expenses not paid by insurance are then paid, as well as property taxes. Credit cards and personal loans are usually at the bottom of the list, and if no money remains, the debt may be written off.

Secured debts, such as a car loan or a mortgage, are also owed after the account holder’s death. The lienholder will either reclaim the property or a relative can assume responsibility for the debt through refinancing. The same is true with most reverse mortgages; you can refinance the loan if the home has been left to you.

Cases Where Family Members May Have to Pay

One of the clearest situations in which you may have to pay a dead relative’s debt involves co-signing. If you have ever co-signed a loan or other credit for that person, you may have financial responsibility.

Other situations involve people who live in states that have more far-reaching rules on debt collection for assets, known as “community property states.”

In addition to the above, you may have to assume a dead relative’s loan if you also are receiving the asset attached to the loan — for example, a car or property.

Another problem can occur if beneficiaries of an estate fail to realize that they should pay old debts before accepting the money that is left. If you are the beneficiary of an estate, financial experts suggest that you post a notice encouraging creditors to contact you with old debts the estate may owe.

Typically, creditors have a certain amount of time to respond to these public notices; if they don’t, you have a good case against collection later.

The general rule of thumb is to go through an estate process with legal representation, carefully identifying any debts that must be paid and figuring out how much, if anything, will be left in the estate after all debts are satisfied.

If there are multiple executors, they will need to work closely to resolve all debt issues as the estate is settled. It’s relatively rare for family members to be asked to pay money out of their own pockets to cover a relative’s old debts.

If this happens, make sure to document efforts by debt collectors. If you’re unsure about these debts, seek legal representation to figure out whether you are being targeted inappropriately by a debt collector.

Remember, regardless of what debt collectors tell you, they are bound by specific rules on how to go about collecting unpaid debts, especially when a death has occurred. Stand up for your rights and let creditors know that you will be vigilant in pursuing your best interests, even while grieving for a lost family member. 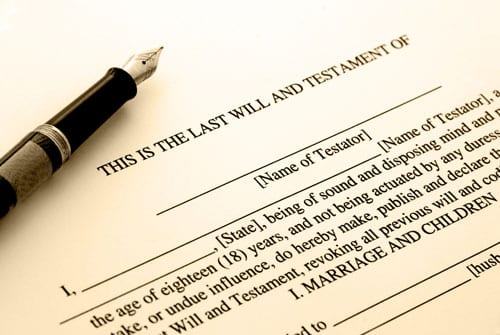