Didn’t File Taxes Yet? Here’s How To Limit Damage

April 15 has come and gone, but millions of Americans are still fretting over their taxes, mostly because they haven’t paid them yet.

The IRS estimates that 25 percent of taxpayers missed the April 15 deadline, meaning about 30-40 million people haven’t filed taxes, paid taxes or both.

That behavior is heavily frowned upon by the IRS, but if you’re ready to own up to your tax responsibility, there are ways to get it done with minimum harm to your bank account.

For example, if you are certain you will be getting a refund, there is no rush to file. You can sit on your return for three years and still get your money. The IRS will wait until April 15, 2018 to hear from you, but if you haven’t filed by then, your refund money is forfeited to the government.

Before you shake your head and say “no way I would forget that,” be aware that the IRS estimated that it was holding more than $1 billion in unclaimed 2011 tax refunds for 1.1 million people. The median refund not claimed was worth $698. That money now belongs to the government.

If you owe taxes, however, that is another story. Fines and penalties are in your future. The sooner you file your taxes, the less trouble you will be in, but it could be costly.

If you filed for an extension, you have until Oct. 15 to get your taxes done, but if you owe money, you had better be sending it right away. The IRS gives you extra time to file your taxes, but not to pay what owe. Even if you don’t know how much you owe or what tax bracket you’re in, or can’t pay the whole tab, go to the IRS website (irs.gov) and set up a payment schedule.

Because you’re late, you will get penalized. The IRS gets six percent interest on the amount of tax you owe and that interest is compounded daily and must be added to your payments.

The next penalty is called a “failure-to-pay” which applies if you didn’t estimate your taxes and pay in advance or set up a payment schedule. You are charged 0.5 percent of the tax owed for each month, or part of a month until you pay. The rate can increase to 1 percent per month.

Make Sure It Adds Up

The last ding to your wallet is called “failure-to-file.” This one applies to anyone filing after April 15, who didn’t get an extension. The penalty for filing late is 5 percent of the tax owed for every month or partial month until you pay. If you wait more than 60 days to file, the penalty is the lesser of $135 or 100 percent of the tax due.

If you’re paying all three penalties – interest, failure-to-pay, and failure-to-file – you might need want to have an accountant or tax preparation service look over your return to be sure the numbers add up right. Only 1 percent of taxpayers (about 1.4 million people) get audited, but there is no sense compounding the problems.

The good news, if there is any at this point, is that the IRS makes it easy to pay what you owe. The fastest way is to send money online from a checking or savings account with no fees charged. Other payment choices include over the phone or with a credit or debit card. 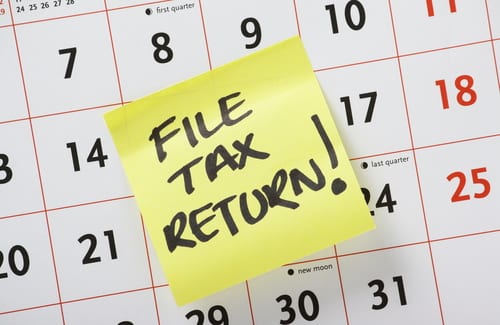