In 1999, Susan Beacham quit her job as senior vice president at Bank of America in Chicago so she could spend more time with her daughters.

She volunteered to teach a class about finances at her oldest daughter’s school and even arranged a field trip for all the students to McDonald’s annual shareholder’s meeting.

“We had been comparing McDonald’s and Burger King in the class I was teaching, and the stockholder’s meeting was in town, so why not?” Beacham said.

So off they went, 63 students and a former bank vice president to listen in on the business exchange at one of America’s corporate giants. Parents questioned whether their kids would grasp the concept of investing, and Beacham wondered about that herself.

She got her answer the next day when reading the students’ thank-you notes to McDonald’s.

“I learned that being a shareholder at McDonald’s means that you own part of the company and that when the company makes money, you do too!” Maria’s note read.

Beacham beamed. Maria was an 8-year-old second-grader. So were the other 62 kids she took to the meeting. These kids understood the basic fundamentals of finance. 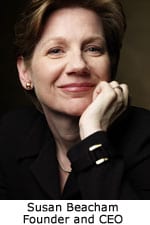 More to Money than Spending

“Kids know about spending money, but unfortunately for most of them, that’s all they know,” Beacham told Debt.org. “The only thing they learn about money in school is how to make change. I thought it was important that we show them the other choices they can make with money.”

Beacham built a financial foundation around four words: Spend, Save, Donate and Invest. She redesigned the time-honored piggy bank to include slots for each one of them and then created a program to explain why you put money in each slot. The four-slotted piggy bank proved to be a stroke of genius.

“The concept of saving is a nice idea to talk about, but you really need something concrete, something they can put their hands on and wrap their arms around, before kids understand,” Beacham said.

The students became increasingly aware of the financial situations they were in at home and sometimes brought questions to the class. Knowledge of finance became really relevant when money was tight.

“Kids might not hear it when you say ‘Pick up the toys,’ but they do hear it when you say ‘Daddy lost his job,’” Beacham said. “We’d talk about things they could do to help out, until Mom or Dad got another job, things like being in charge of turning off the lights or checking the thermostat so they could reduce the electric bill. We’d talk about eliminating things like cookies and chips to save on the grocery bill. Give them something concrete to do, and they would understand and do it.”

It didn’t take long before teachers and parents recognized the value of the class and asked for more. Beacham put together a curriculum for various grade levels, gave the program a name – Money Savvy Generation – and sold it to school in 27 states and several foreign countries.

The hardest sell was right where it started – her hometown of Chicago. Teachers complained the school day wasn’t long enough to add another subject. Beyond that, most were overwhelmed by the subject matter. Beacham solved both problems.

She trained school librarians to teach Money Savvy Generation to students. Teachers often sat in on the classes and became just as enthusiastic as the kids, eventually taking over and teaching the subject themselves.

“We wrote the materials as a script, so all the teacher has to do is read the script to present the lesson,” Beacham said. “The teacher gets a handbook, the students get a workbook and it’s practically self-taught from there.”

Beacham also wrote individual books and has other materials available on her website for parents or grandparents who want to teach children at home.

“Somebody is trying to sell kids hamburgers or cereals or clothes or whatever every single day,” Beacham said. “The only message they’re receiving from these marketing pitches is: SPEND!

“If we don’t teach them the ABCs of finance – Allowance, Budget and Choices – we’re going to end up with D and E – Debt and Entitlement. My goal is to keep kids away from D (debt) and E (entitlement) for the rest of their lives.”