What Happens When People Die with Debt: Who Pays?

Millions of Americans are getting buried in debt, literally.

A shocking number are dying with unpaid mortgages, car loans, student loans and credit cards. It’s shocking in the sense that half of those people would be stunned to find out they’re going to leave a stack of unpaid bills when they pass on.

Are you one of them? If so, what can you do about it?

There are the timeless practices like saving, budgeting and working hard. If you need assistance, debt management programs can help you erase all that red ink.

But whatever strategy you choose, success begins with a willing attitude. Unfortunately, the prevailing mood when it comes to debt relief seems to be gloom and doom.

Thirty percent of Americans firmly believe they are doomed to be in debt until the day they die. That’s according to a 2017 survey of 1,114 adults by CreditCards.com.

Even more people are simply pessimistic they’ll ever pay all their bills before their time runs out. The study showed that 65% of millennials are unsure they’ll die debt free, while 83% of retirees over 72 aren’t sure.

The scary part is that as gloomy as a lot of people are, the actual statistics are twice as depressing.

A comprehensive survey found that 73% of Americans are likely to die with debt. That finding comes from the credit reporting agency Experian, which tracks more than 220 million consumers.

Credit.com surveyed the database and found that 73% of people who died between October and December of 2016 had outstanding debt. The average bill they left on the table was $61,554.

Broken down, 68% of the deceased had outstanding credit card debt, 37% had unpaid mortgages, 25% had unpaid car loans, 12% had unpaid personal loans and 6% had unpaid student loans.

There is no reason think the survey’s time frame was an anomaly when it comes to overall death rates. That means that almost three out of every four Americans are not leaving anything behind for their families except maybe a lot of headaches.

The only good news is that their survivors probably won’t get stuck with the unpaid bills. Creditors are paid from the deceased person’s assets – homes, cars, bank accounts, etc.

If there’s not enough money in assets to cover the debts, the creditors simply have to take what’s available. Family members or other heirs are not responsible except in certain circumstances.

For example, they would be liable if they shared a credit card account, or if they’d cosigned on a loan with the deceased. So if your 92-year-old aunt asks you to cosign on a new Mercedes, you might want to tell her to go back to her bingo game. Or better yet, tell her to try to charge it on a credit card that is in her name only.

Paying off creditors can still get complicated, especially when it comes to houses. If you cosigned the mortgage, you have to keep paying it even if the other cosigner passes away.

But say you didn’t cosign and are simply living in the deceased person’s house. You might have to move if the house is sold to pay off the mortgage or other creditors.

It’s safe to say that’s not the situation most people want to leave behind for their loved ones. They want to die knowing their family, friends, pets or other beneficiaries will be taken care of.

The fact that 73% of us won’t be able to do that should not trigger gloominess. It should make you want to get the heck out of debt before the hearse arrives.

The best advice is the simplest – don’t spend more than you bring home. Make a budget, listing your monthly income and expenses, and don’t let the second column get larger than the first.

That’s easy enough to do on paper, of course. It can be much more challenging to do it in the real world.

U.S. household debt climbed to almost $13 trillion in 2017, according to the New York Federal Reserve. Credit card debt hit an all-time high of $1.02 trillion. The average American has a credit card balance of $6,375, according to Experian’s 2017 study of U.S. credit and debt.

Nothing indicates people are living beyond their means more than credit card debt. And 35% of respondents to the CreditCards.com survey believe they will never pay off all their credit cards.

Never, as in they’ll be paying 16% interest until they die. That’s depressing enough to make anyone want to jump off a bridge.

Don’t do it. There are better ways to handle things.

One is with a debt management program through a nonprofit company. A counselor works with creditors to reduce interest rates on your credit cards and other bills.

When you consolidate debt into one monthly payment, you may also be able to lower your payment. The counselor also sets up a long-term budget to get you out of debt.

Most respondents in the CreditCards.com survey said it would take at least nine years for them to get out of debt. The average time is less than half that in a debt management program.

Once you’re free of debt, you hopefully will have developed habits that will keep you there. The economic gloom so many Americans feel will disappear.

As for the doom, we all have to die sometime. But you’ll probably die a lot happier knowing you left the world with as much debt as you had when you entered it. Home > Blog > What Happens When People Die with Debt: Who Pays? 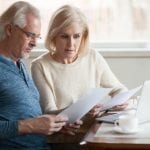